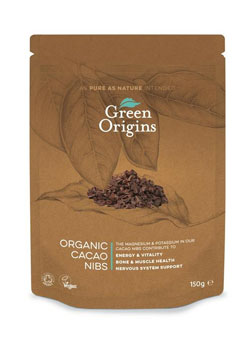 Cacao grows on tropical trees and is native to Central and South America. It is the main ingredient in chocolate, but it is increasingly consumed for its nutritional value as well as its taste.

Cacao is high in magnesium, which supports the nervous system and reduces tiredness, stress and fatigue. It also has a high antioxidant content, which is known to help fight off the effects of ageing, by reducing oxidative-stress cell damage.

Cacao nibs are an easy way to incorporate more nutrients in your diet by using them as a baking ingredient, as a dessert topping or eaten as a snack.
The cacao used to make Green Origins Organic Cacao Nibs is grown in South America, its native region. The cacao trees are found on the lower story of the evergreen rainforest as they thrive in humid temperatures with fairly constant rainfall, these conditions encourage optimum organic growth.

Cacao beans grow in green pods, which are hand-picked from the tree and the flesh surrounding the beans is then allowed to ferment away. This enhances the bean’s unique flavour and reduces their bitterness. The beans are then broken into small pieces known as nibs. Cacao beans and nibs are very nearly the rawest form in which Cacao can be consumed.

As beans and nibs are minimally processed, an optimum amount of their nutritional value is retained.

Cacao is a source of calcium, copper and manganese, which support digestive and cardiovascular health. It is also high in magnesium, which supports the nervous system and reduces stress, tiredness and fatigue.

Cacao is known for its antioxidant content, and these properties are thought to help fight off the effects of ageing, by reducing oxidative-stress cell damage.

It is recommended that you take up to 2-3 tablespoons per day. Cacao nibs can be used as a baking ingredient, added to other foods or eaten as a snack.

This product should not be used as a substitute for a varied balanced diet and a healthy lifestyle. Do not exceed the suggested use. Store your Cacao Nibs in a cool, dry place.